The historical B.B. Moeur home, and office of Tempe Community Council, is located at 34 East 7th Street, in Tempe, Arizona (map it) 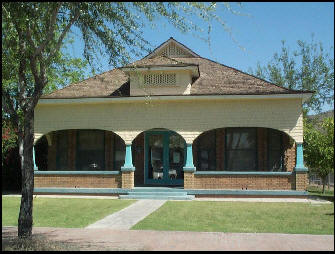 The Moeur house was occupied by Dr. Benjamin Baker Moeur from 1898 until his death in 1937.  Originally a wood frame cottage, it expanded over the 40-year period to a large, prestigious home of 2,800 square feet that represents a unique evolution of additions, modifications, and stylistic interpretations.  The residence is a locally significant example of early twentieth century residential architecture.  The house was built in 1893 and was purchased by Dr. Moeur in 1898.  He began the additions and changes in 1901.  The most drastic of the changes were made in 1912, which gave the house a more formal appearance representing the then popular Neo-Colonial Revival style that is of architectural significance today. 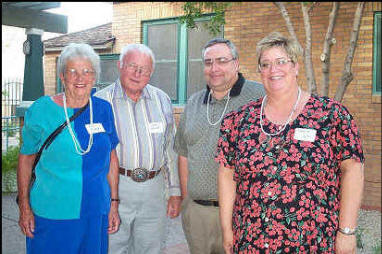 The five-bedroom home has been restored using Federal Community Development Block Grant Funds through the City of Tempe, and a separate community building was added (Hatton Hall) for City committees, nonprofit community meetings, and events.

Dr. Moeur was born in Franklin County, Tennessee, on December 22, 1869.  The Moeur family moved to Texas a few years later to join other family members in a ranching business and provide his father, Dr. John Moeur, with a suitable location to set up a medical practice.  After graduating high school, B.B. Moeur decided to leave the family ranch life behind and pursue a medical career.  He attended Arkansas Industrial University (now the University of Arkansas) at Little Rock, and Rush Medical College in Chicago for his final training. 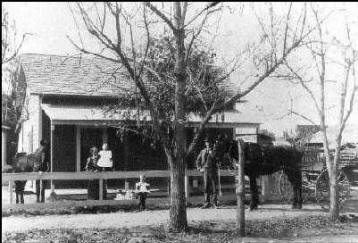 When his education was completed in 1896, he returned to Texas and married Honor Anderson.  Dr. Moeur and his new wife followed his brother’s advice and moved to Arizona, living in Tombstone and Bisbee before settling in Tempe, where they raised four children.  Mrs. Moeur is said to have stopped at the Tempe Depot, liked the quaint town and its many gardens, and decided not to bother traveling the extra eight miles to Phoenix.

Dr. Moeur established his medical practice soon after arriving in Tempe.  While doctors were in demand in the early 1900’s, Moeur become “one of the busiest and best-known horse and buggy doctors of the Salt River Valley.

Moeur spent 40 years in Arizona during which he practiced medicine, served as a member of the Arizona Constitutional Convention, managed area ranching interests, was involved in local educational affairs, and served as governor of the state for two terms.  Moeur also served on the Tempe School District board and as a director of the Tempe Normal School (now ASU) board for 12 years.  He volunteered as a school physician and established a scholarship program at the school.

The height of his civic career was attained in the 1930’s when he was elected twice as Governor of Arizona.  His contributions as Arizona’s Depression Era governor from 1932 to 1936 included his involvement in the recovery of the state’s economy, and his policies and actions to protect Arizona’s Colorado River water rights.  Major projects credited to him include the Tempe Bridge, now known as the Mill Avenue Bridge, and ASU’s Moeur Admin. Building.